I consider myself a compassionate person. I care for people I don’t know, I worry about injustice, I pray for people who need my prayers. I have always been this way, when I was little I would see an accident and it would ruin my day, I would think all night about the family that might have been effected by that accident. I remember telling a shrink once about that, as proof I was crazy and he said, I don’t call that crazy, I call it compassion.

Yesterday I left the hospital and went on a drive to pick up something Faith needed. Driving anywhere lately I really have to concentrate on what I am doing, because I am so distracted thinking about Faith. Thankfully I was able to see a mother duck and her many ducklings that were crossing a very busy Ann Arbor street. I stood still and watched as the mother lead her babies across this busy street. There was one that was way behind the rest. I laughed at first, thinking it must be the runt of the litter. I took pictures to show Faith. It was a little bit broke in the middle, It would take a few steps, then stop and sit for a minute. So then, I started to think it wasn’t so funny.

I started to be upset by it, the compassionate me kicked in. It was a determined little duck, for sure.  The rest of the family was already over the curb and on its way into a pond as this little duck finally reached the side. I knew what was going to happen, there was no way it was going to make it over the curb. I watched for a few minutes until it looked like it had completely given up. The mother duck had also given up on this little duckling because she had left her baby completely behind. I was totally disgusted at that momma duck and decided to handle the situation myself. I got out of my car and picked the duck up with a piece of cardboard and put him up on the curb. It was squeaking at me, I am sure I scared it. But I was also sure I had saved it. As I walked back to my car, I a man stopped to ask me if I was okay.

I told him about the ducks and apologized for being stopped in the road. He assured me that I wasn’t in his way he was just concerned when he saw me crying. What? I quickly got in the car and wiped my cheeks, he was right, I didn’t realize it but I absolutely was crying. And once I realized that I was I really started crying. That little duck, suddenly made me think of everything Faith was going though, and the ducks mom was giving up.

So compassionate me was crying over a mother duck that had given up on her baby??? What kind of mother duck gives up on their baby? People are always telling me how strong I am, and what a great mother I am, but really, mother ducks maybe can give up, but mothers, don’t, they never ever give up.

We are in the hospital right now, a few weeks ago Faith had almost all but a few inches of her colon removed. And it has been a battle to get her gut working again, she’s been in a lot of pain and wasn’t able to eat or drink anything for fourteen days…She was feeling pretty horrible not to mention the pain from the actual surgery. One morning, as I was holding a heating pad on her belly and an ice pack on her forehead singing to her, she was moaning and she looked over at me and said, Mom I am so sorry. I know that you really miss my bubby (Will). Don’t you wish you could trade me with a perfectly healthy kid? I assured her I  wasn’t interested in trading her with anyone. Not even my girlfriends son Zack who I’ve been trying to take as my own since he was born. She said, well I would understand because I would trade me if I could.

You hear your child say something like that and it takes the breath out of you. Faith is strong, the staff at this hospital is amazed by her, she has been through so much, yet she is still so resilient. But there are times, when the two of us are all alone, or when she is with youth pastor from our church, that she starts to act like she’s had enough. She asks about going to heaven.  I used to think it’s because she’s seen so much death here, but then she follows it up with questions like, Will I be able to poop in heaven and does Jesus poop? She asks if she will know when it’s her turn to go with Jesus and if her grandfather (my dad) will be waiting for her when she gets there. She asks if there are hospitals or sick people there and if she will be able to see her brother still from heaven. She asked me if I promised to marry her Denny if she wasn’t here anymore. She told me the other day, she thinks if she goes to heaven her belly would finally feel better.

Today Faith went back again to the operating room for a very simple procedure, she came out okay, and then things went down hill. She sits on my lap and says over and over again, Mom my belly hurts. And I promise her that someday we will fix it, that she will feel great, that she will be all better. She says to me, I know someday I will be all fixed.

Honestly, I wonder all the time what all fixed is for Faith. It’s funny, sometimes, I don’t even know what to pray for. It seems to change from hour to hour. I sometimes sneak to the chapel at the adult hospital, it’s the hospital where my dad died, and where I went to ask god, to be compassionate and  take my dad peacefully, because I was worried about my step-mother and brothers.

Now when I go, I just sit there. I can never even formulate a thought or a prayer, but for some reason I feel like  my prayers were answered once there, maybe they will be again. Asking god to take my dad in a peaceful way was easy, his plan for my father was clear, he was leaving us whether we liked it or not, so I felt at least he could leave us without making it any harder on those of us he was leaving. And sure enough his death was as peaceful as could be. But with Faith its different, almost as if I am afraid my prayers won’t be answered so I am afraid to speak.

Tonight, it was different. Tonight, I put my running shoes on and ran to the chapel as quickly as I could.  I finally had words, maybe even a prayer, I knew exactly what I wanted to say…just 6 little words.

I am not a mother duck.

That’s all I said, and I felt like I had finally said everything I needed to say. Now, I wonder if I thought since I asked God to take my dad peacefully that I needed to make it perfectly clear,  I don’t want anyone taking Faith anywhere. That I am not giving up on her. That we can handle what we’re given here together and we will do everything we need to do to make her better and by no means is there anyway I will ever give up on her or wish that my life was normal or less stressful or that I had a different kid that wasn’t sick.

I love my little duckling that’s a little bit broke in the middle, BUT I will never be a Mother Duck. 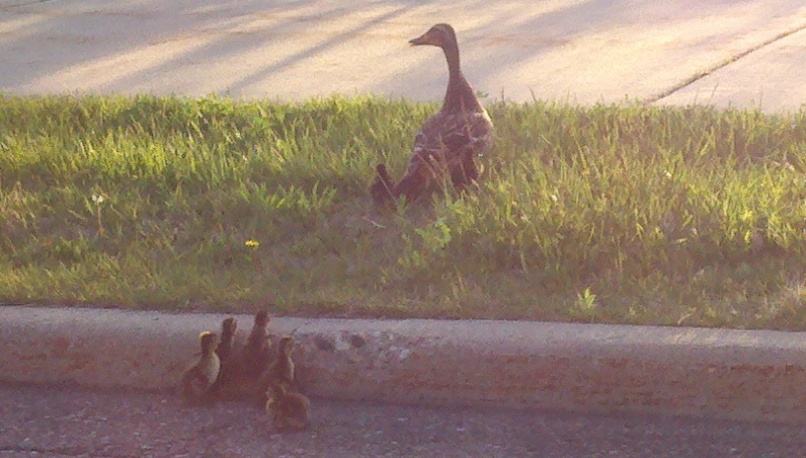